In Tanzania in February/March, millions of Wildebeest migrate to have their babies.  They follow the rains to the Southern Serengeti to feast on special grasses, rich in nutrition.

The predators are well aware of this and follow the migration.  The cheetah was awakened from a nap by wildebeest running by – food!

This cheetah is hungry and has a hungry little one to feed.  I’ve seen 2 cheetahs take down a calf, but this one is going alone to get an adult!

Defeated, time to look for something smaller.
© Diane Kelsay

She leaves her little one behind for another chase and gets lucky.

She carries the kill along while trying to reunite with the little one but can’t find the kitten.

Unheard of for fear of losing it, she puts the kill down and calls and calls while searching.  Finally reunited, they look for a safe place to enjoy their meal.

They take turns eating while the other one guards.
© Diane Kelsay

We were all worried that the little one was lost.  It was stressful. They were miles apart from each other. We stood watch over the kill until they came back.  We all cheered when we saw them.

Link to our Tanzania Photography Safari, timed to intersect with the “birthing” of a million baby wildebeest and a host of predators!

Comments Off on The Great Migration

It’s fun and pretty easy to capture an animal by freezing the action with a fast shutter speed.

But what if you want to blur the image and feel the motion?

Shutter speeds to accomplish this motion usually range from 1/15 to 1/30.

How fast the animal is running, how long a lens you have, all play into what shutter speed to use. I’ve taken photos at the same speed as above, but the legs were totally blurred into the background – animal was running faster.

Get into position when you see the opportunity coming toward you. Focus on the running animal and pan with it – release when the moment is right and follow through.  Think of hitting a tennis ball.  You will get nice background blur by doing this.

Chose a path where the animal will always be in similar light – not in and out of the shade/sun which requires different exposures.  If the background changes from light to dark, auto exposure could be tricked. Manual focus or single point auto focus and manual exposure are needed to avoid picking up information from the background.

We will be working on this technique on our upcoming trips to Africa.

Comments Off on Animals in Motion

As I, Diane, explained in the previous post, I like to watch animal behavior and pick the moment.  That said, there are times when continuous is the best option.  Like the antics of a zebra taking a dust bath.  Sometimes events happen so quickly (like seeing a cloud of dust that might have action) it’s hard to follow with your eye, let alone pick the moment. And there were many to choose from, a real bonus.

Bob writing, now… I was crouching on the edge of a cliff where puffins are flying in from the sea with little fish to feed their young in burrows very close to where I am standing, but also spread out along at least a kilometer of cliff edge.  Birds were coming in from the sea in a steady stream.  They knew where their burrow was, but I didn’t.  As they approached the cliff edge, they would suddenly pivot and fly parallel to the cliff, looking for an opportunity to land at their burrows.  They fly like little bullets.  From the time they make that turn to the time when all you can see is the backside is a matter of 5 to 10 seconds.  One has to “lock on” to focus as they approach, follow the turn, and then make a batch of continuous releases.  Assuming your follow focus holds (and it does more often than not with current technology) you’ll get to pick from several images.  If you get really lucky, like I did in this image, the puffin will make one more turn toward you to land at a nearby burrow.  Then instead of a sideways image, you get more of a head-on shot!

It’s important to build your skills at recognizing and capturing unique moments. There are times when your eye can’t follow the speed of the action and continuous exposure is a great too.

Botswana, Fish Eagle coming in for the catch.
© 2018 Diane Kelsay

The next frame on continuous!
© 2018 Diane Kelsay

Understand that there are times when you are in a quiet place and rapid fire could disturb the wildlife and/or your fellow travelers, causing you all to miss the shot.

Comments Off on Continuous Shooting

Post 2 – The Great Migration was in full swing.  From our lodge at Lake Masek to the Central Serengeti, great numbers of wildebeest and their newborn babies paraded in lines and sometimes just covered the landscape.

Leopards haul their kill into trees.  As we watched the mom and baby high up in the tree, the catch fell to the ground sending them down to collect it and haul it up again.

The little one follows the mom down the tree to rescue the food.
© 2017 Diane Kelsay

This time, the mom wedges the kill into the crotch of the tree – more secure.  The little one goes right to it.

Comments Off on Exploring Tanzania February/March 2017

Post 1 – Tanzania is a land of much excitement.  Animals move about in search of food and water – some for a few miles, while others are on the great migration.  Sometimes we waited for light, sometimes we waited for action.  Many times we witnessed how the animals behaved in a variety of situations, which gave us opportunities for some special photography.

Leopards and rhinos, very difficult to find and this year we were lucky to get both at reasonable distances.  It did take some patience, waiting for this leopard to get up and walk out of the shade, and only for a few seconds.

Cheetah brothers stalk a lost wildebeest baby, and then together jump into a charge.
© 2015 Diane Kelsay

Only one of the cheetahs will make the kill. The other will return to eat.
© 2015 Diane Kelsay

A lilac breasted roller is quick to snap up this insect.
© 2015 Bob Harvey

Our group had a lot of fun learning this technique. It does take some practice. You must pan with the animal as you shoot at a slow shutter speed.

Lions resting, or as much as they can with flies bothering them.
© 2015 Diane Kelsay

Join us in February 2017 for our next safari to Tanzania!

This 4th post will conclude my blog for our February Tanzania Photography Safari.  If you are just visiting for the first time, be sure and scroll down through the other 3 posts.  This was such a memorable trip with the many rare sightings we had and were able to photograph.  At the end of our trip, everyone felt very touched by the sign as we entered Lake Manyara National Park – Remove nothing from the park except: Nourishment for the soul; Consolation for the heart; Inspiration for the mind.  They said “that was our trip”!  Join us in 2015 http://www.naturephotographyadventures.com/workshop.photo.tanzania.htm

The lion cub photo on the last post seemed to be everyone’s favorite, so I am including 2 more of the 20 or so shots I got of this cute little guy. 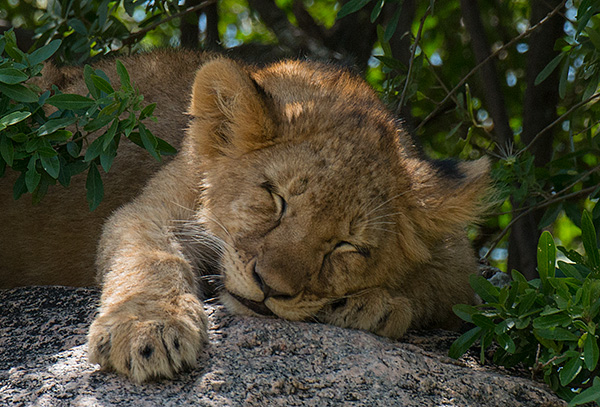 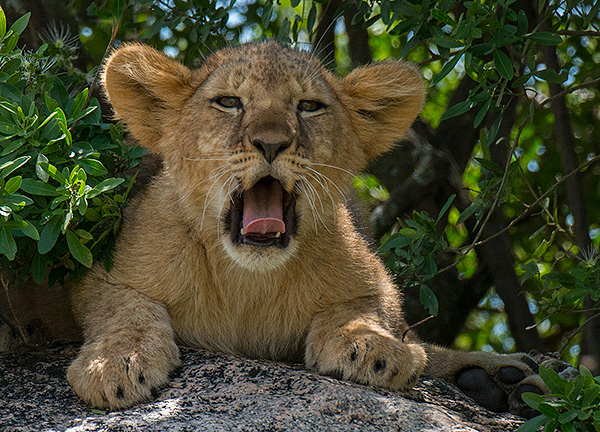 And speaking of yawns, check out the teeth on this cheetah. 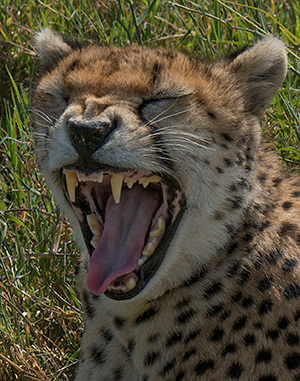 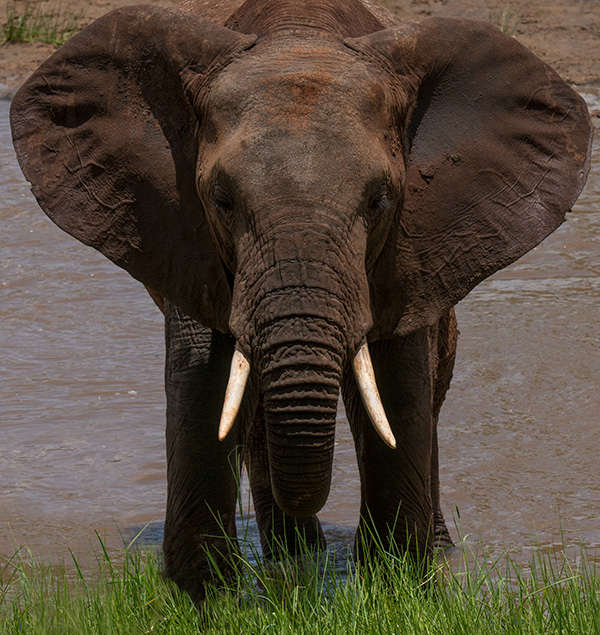 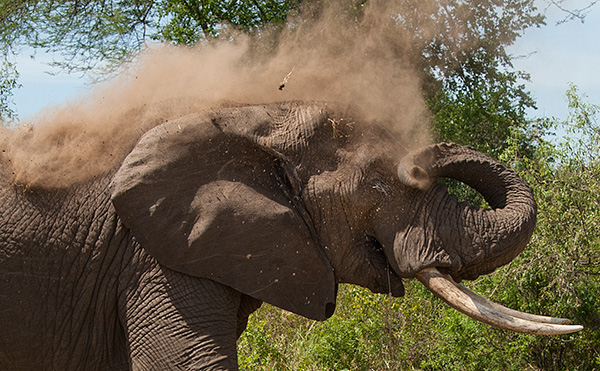 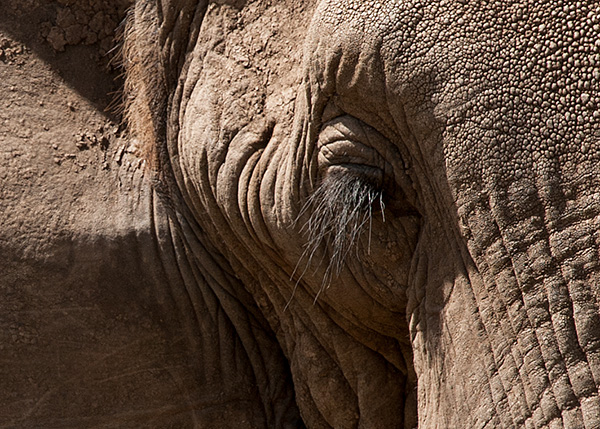 Look at those lashes – yeah, we were pretty close
© 2013 Diane Kelsay 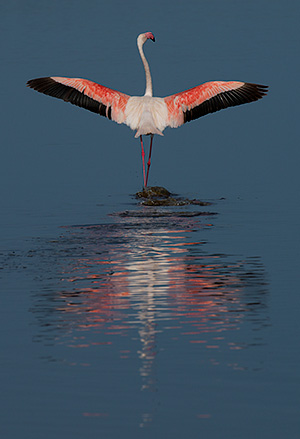 The elegance of the flamingo
© 2013 Diane Kelsay 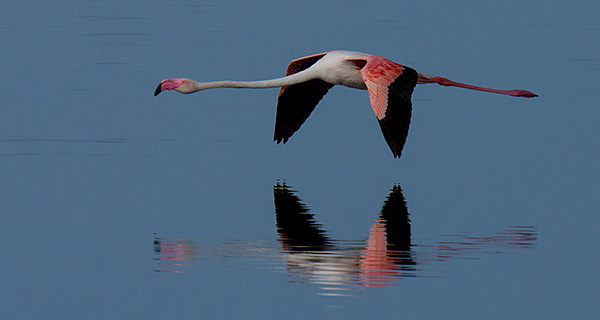 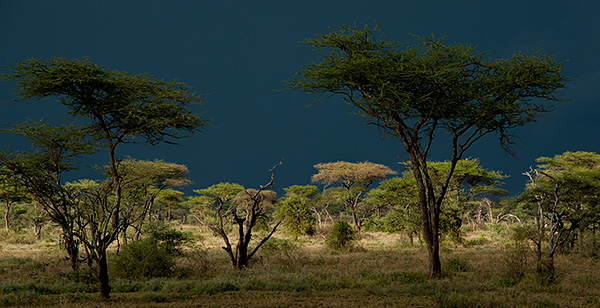 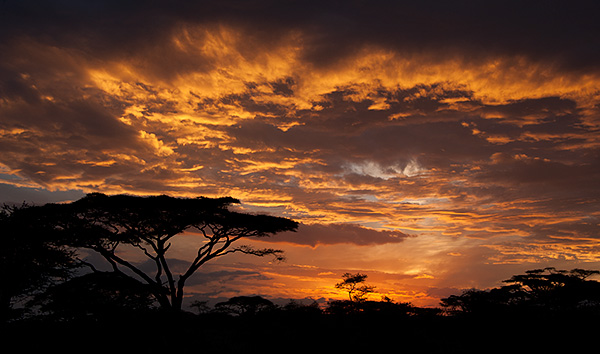 Sunrise after the storm
© 2013 Diane Kelsay

Our first morning in the Serengeti… I was awakened by the sounds of lions roaring, hippos grunting, and something munching the grass outside my tent.  I thought that would just be a giraffe – not so.  At 6:00 am my fearless Maasai warrior escort arrives and starts stomping and yelling to chase away two cape buffalo right off my deck blocking my exit (fortunately the deck is 4’ high).  The buffalo responds and gives me some space.  I did check to make sure my escort had his spear before I came down the steps.  We always have an escort when it is dark. 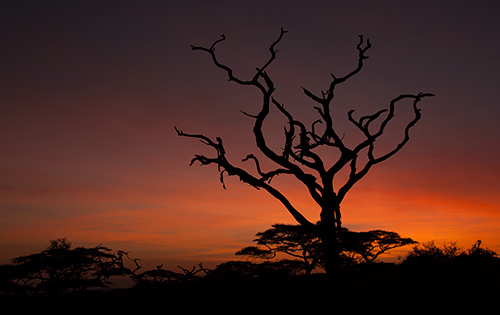 After breakfast, we had a beautiful sunrise by my favorite tree here at Masek (which is near my tent).  The day only got better with lots of cats and more. 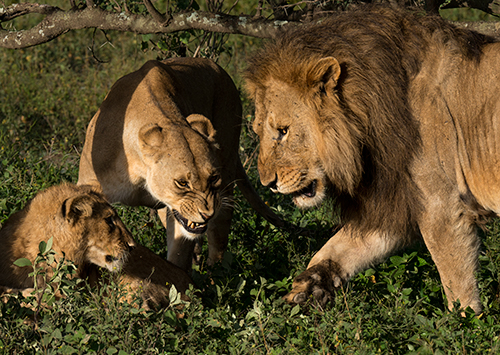 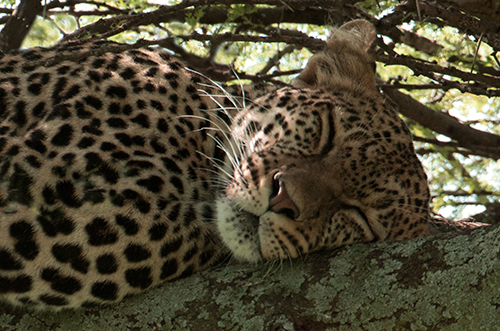 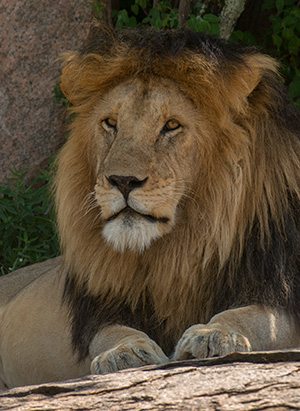 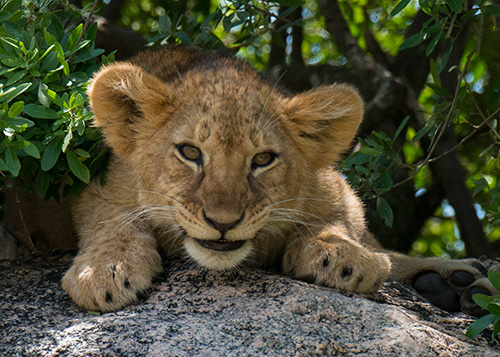 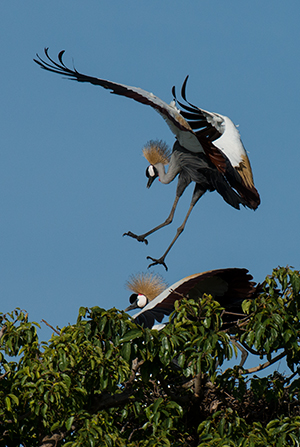 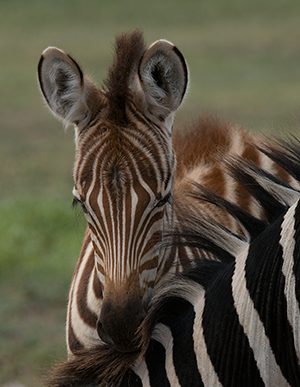 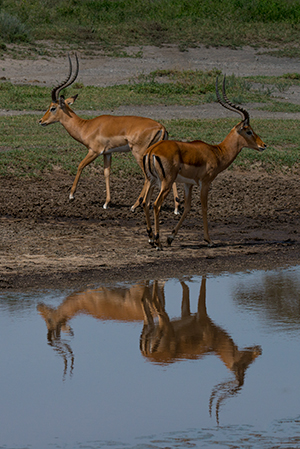 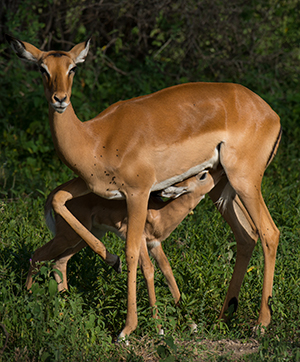 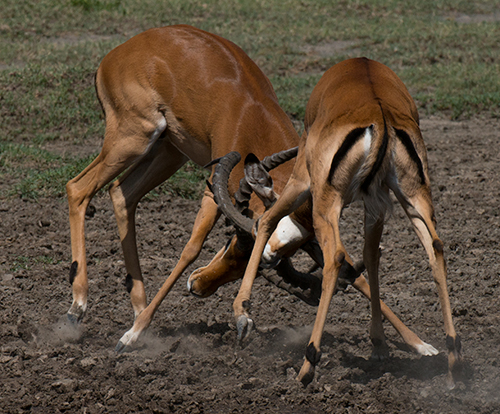 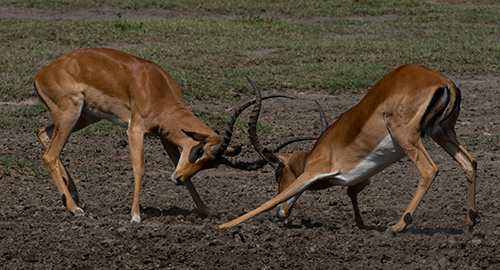 We met some Maasai junior warriors out herding goats and stopped to chat. One of them tried to offer me his necklace, didn’t know what that implied so I gracefully declined. 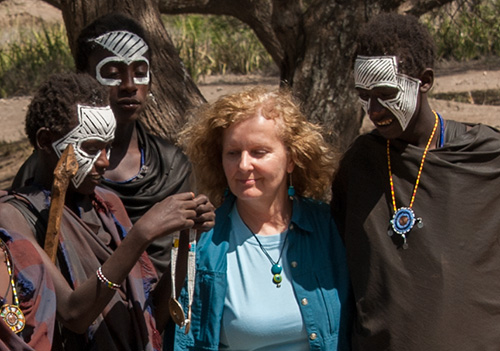 photo taken by Said, our guide

More photos to come in a few days.